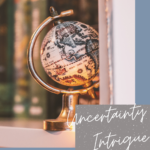 The world is getting smaller.  Have you heard this before?  It’s one of those statements that’s true and false all at the same time.

It’s false because our physical world is not shrinking.  The distance between New York and San Francisco is fixed.  The distance between Sydney and London is fixed.  You won’t find the number of miles between these places getting smaller as the years go on.  So, in that sense, no, the world is not getting smaller.  It’s staying the same exact size.

Yet, just 500 years ago, it took 3 years for people to travel around the world.  Today, it can be accomplished in less than 48 hours (via airplane without stopping).  So, yes, in this sense, our world is getting smaller.

Now, some people have said that reading Around the World in 80 Days is more of a challenge than it’s worth.  And it’s true that the language can pose a challenge – particularly if you’re not used to it.

Jules Verne includes a great many details, not only of the adventures that happen as the characters travel around the world, but also of the vehicles they use to travel.  I’ll be the first to admit that while I enjoyed every detail of reading about the elephant Phileas Fogg and his servant, Passepartout, rode through the Indian jungle, the details about the steamers they took to cross the oceans didn’t feel as interesting to me.

And yet, the details are what make this book believable.  The incredible detail that Verne goes into takes this voyage around the world from a fantasy to a plausible reality.  As you travel with Mr Fogg, you begin to believe every step he takes along the way is entirely possible.  Every train to be caught has a timetable that you must work with.  Every steamer pulls out of port at a specific time and it’s up to the travelers to make sure they’re on board.

Adding to the Adventure

Let’s face it: As important as they are to the story, the details in this book can feel a little overwhelming at times.  And yet, when you pull back a little and look at this from a larger perspective, the details really serve to add to the adventure.

When someone like Mr Phileas Fogg takes on an adventure to travel around the world in 80 days, risking his fortune saying that he’ll be able to accomplish it, there’s adventure.  There’s risk.  There’s a deadline that must be kept at all costs.

But when you start to travel with Mr Fogg, when you see the time schedule he must keep, every detail serves to add to the suspense and intrigue of whether or not Mr Fogg will meet his deadline.  You see, the details of the steamers – how fast they can go, how many miles they must go – aren’t meaningless details put there simply to fill a page.  They give you a glimpse into the mind of Mr Fogg.  They show you how his brain calculates everything to the last detail, where time can be gained, and where time is lost.

The details add to the suspense and the adventure, showing you this is no ordinary adventure around the world.  In fact, it’s a race against time.  A race of planning and methodical steps against the uncertainty of the world.

But what of the man who makes this bet?  Who is he?  What sort of man would risk his entire fortune on a trip like this when there are so many unknown factors in play?

At the very beginning of the book, you meet Phileas Fogg.  And very quickly you begin to see that he is one of the most methodical men who ever walked the earth!  Every step is counted.  Every moment is accounted for.  There’s no extra energy expended.  Every aspect of his life from the time he wakes up to the temperature of his tea to the time of his meals is carefully planned and lived out.

To be honest, Mr Fogg is the last man on earth you would expect to risk his entire fortune on making a trip around the world – especially one that must happen within 80 days!

And yet, this is exactly what he does: Risk his fortune by saying he can travel the world in 80 days just to prove it can be done.

However, a trip around the world would be very boring if all you see are train stations, the decks of steamer ships, and the inside of carriages.  And yet, taking into consideration the methodical character of Mr Fogg, it wouldn’t be right for him to be seen exploring the cities where he stops.

Meet Passepartout, the servant who is employed by Mr Fogg on the very day the wager to travel around the world is made.  In fact Passepartout is hired on the same day he and Mr Fogg leave on this incredible journey!  Passepartout is everything that Mr Fogg is not.  He’s adventurous, impulsive, amazed at what he sees, loves to engage in conversation, and sees this trip as an adventure instead of merely a race against time.

On top of all that, Passepartout is extremely loyal.  He’s not been serving Mr Fogg for even a full day when he leaves on this trip around the world, but every move that Mr Fogg makes instills in Passepartout a trust in his methods.  A sense that Mr Fogg knows what he is doing and shows he’s an honorable man filled with integrity.  Passepartout recognizes these qualities in his master and in return gives him his full and complete trust and loyalty.

But Passepartout is not simply on this journey to ride on trains and carriages and steamer ships.  He wants to take advantage of this opportunity and see the world while he can.  Unfortunately, this desire to see the world has a tendency to backfire on poor Passepartout!

In every city they visit, you’re able to see the intrigue, the amazement, the wonders of that place through the eyes of Passepartout.  You see, Mr Fogg seems to travel without seeing.  To be only concerned with getting from one point to the next on time.  And yet, Passepartout travels with his eyes open wide with wonder, taking in all the sights and sounds of each new place.

Through Passepartout you see the bustling cities of Bombay and Calcutta.  You see the beauty and the depth of the Indian jungle.  You see the mix of cultures in Taiwan and Yokohama.  You see the height of the Rocky Mountains and the vastness of the American plains.

And yet, even though Passepartout travels with his eyes wide open, he seems prone to make mistakes.  He’s unaware of the culture of the cities and unintentionally offends the people – quite often!  He’s taken prisoner for a time.  He causes Mr Fogg delays and what most people would call frustration.

It’s almost like you get to see more of the character, more of the integrity, more of the honor of Mr Fogg by seeing the unthinking actions of his servant.  And yet, through all these missteps, Mr Fogg never once loses his temper.  He never once lashes out at anyone.  He is always moderate, reserved, and methodical.

You see, just before Mr Fogg left London, one of the most famous banks in the city had been robbed.  The challenge comes into play when no one got a good look at the thief.  So, this makes almost anyone traveling without a reason a suspect.  And apparently a trip around the world to win a wager is not enough reason for one detective.

Meet Detective Fix.  An extremely resourceful, tenacious private detective who is completely and totally convinced that Phileas Fogg is the bank robber.  Detective Fix will stop at nothing to bring this so-called scoundrel to justice and even goes so far as to follow him around the world, tracking his every move, putting delay after delay in his path.

And who can blame Detective Fix?  For such an extremely methodical man as Mr Fogg to suddenly change his entire way of life and start traveling is quite a change!

And yet, this is where the heart of the book is really seen.  It’s seen in the characters and how they relate to each other.  It’s seen in making mistakes and extending forgiveness.  It’s seen in forming opinions based on incomplete facts and owning up to your own mistakes.  Each of these three men, Mr Fogg, Passepartout, and Detective Fix, are faced with challenge after challenge through their journey.  Yet, it’s how they deal with these challenges that show you the kind of men they truly are.

Now, don’t get me wrong, I think adaptations have their time and their place, particularly for younger readers who aren’t used to the language and the style used in the last 1800s.

TV mini series and movies adaptations of books are helpful and useful because they can give you a visual picture of places far away that you might not be able to fully imagine.

However, there’s nothing that can replace the original.  No book, no movie, no TV mini series can fully take the place of the original work as it came out of the imagination of the author.  You see, this journey was very real to Jules Verne.  It had to be!  If this journey was not real to him, if he didn’t live it out in his imagination, he wouldn’t have been able to write about it with such accuracy and detail.  He wouldn’t have been able to take you along on the adventure with him.

The beautiful thing about reading books – particularly the original versions – is it allows you to join the author in his imagination.  It allow you to join with him on the journey.  It allows you to be a part of the intrigue and adventure the way that Jules Verne saw it playing out in his own mind.

Around the World in 80 Days is an unforgettable adventure!  Truly, what could be better than a race around the world against the clock, against the calendar, overcoming obstacles, having adventures, and being pursued as a criminal?

If you’ve never taken the time to read and appreciate this incredible book, I highly encourage you to do so.  For that matter, read it out loud together with your children!  While you won’t spend a lot of time in each and every city along the way, you will get a quick glimpse at cultures, places, peoples, traditions, and customs you never imagined.

Are you looking for a quick glimpse at some countries around the world?  Check out you free First Lesson of Adventures Around the World!  This fun and interactive geography curriculum will give you a glimpse into 3 countries on 3 different continents.  But don’t think for a moment that it’s just reading some words on a page and finding a spot on a map!  Adventures Around the World is created to give you an experience.  To take you on an adventure through crafts, recipes, games, activities, and more so that you can experience this incredible place we call earth.

You can check it out right now!  No obligation.  No money.  Just a fun look at what’s coming.  What are you waiting for?  Claim your free First Lesson below.

Previous Post: « 14 Simple Ideas to Help Organize Your Bathroom
Next Post: The Magic of Baking with Your Children for the Holidays »