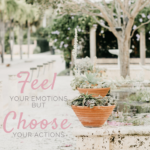 For all those who are frustrated…

For all those who are losing hope…

This is for you.

I recently set a goal for myself to accomplish this month.  This is the same goal that I set for myself to accomplish last month and I failed to achieve it.  As I’m nearing the end of the month, the finish line of time on my goal, I realize that I’m so close – closer than I’ve ever been before!  And yet, the realization of this goal seems farther away than ever.

Have you ever been there?  Have you ever been in that place where you feel almost paralyzed wavering between debilitating fear, the depths of despair, the adrenaline high of giving it all you’ve got, and the euphoria you know you will get once you reach your goal?

Can I ask you a personal question?  Are you harder on yourself than anyone else is?

Can I share something with you?  This is a lesson that I’ve had to learn from many times being in that paralyzed in-between place.  The only way that you can truly fail is to not try at all, to reman frozen in fear.

Now, I know, this sounds cliche, but bear with me on this one, okay?  Think through the concept behind the statement: It’s saying that if you do not move, nothing will happen.  Very true!  If you stay put and don’t do anything, nothing will happen.  There is no chance that you will move one iota closer to your goal and there is no chance that you will move miles away from your goal.  If you stay put, doing absolutely nothing, you will fail because you never even attempted to go for the win.

But what about all those emotions?  The debilitating fear?  The depths of despair?  The adrenaline high of giving it all you’ve got?  The euphoria of accomplishing a goal?  The myriad of varied emotions that aren’t listed here?  What do you do with them?

Emotions are tricky things!  Here’s a truth that it took me years to learn: Your emotions are not the enemy.  Feeling an emotion (happiness, fear, shame, sadness, anger) is not wrong in and of itself.  It’s what you do with those emotions that makes them right or wrong.  Don’t be afraid to feel the emotion of something.  Emotions, believe it or not, are actually very helpful when we use them correctly.  Allow your emotions to show you what’s going on “under the surface.”

Think of it like this:  Todd and Brandon are playing catch.  Todd makes a comment that hurts Brandon’s feelings.  Hurt, anger, and pain begin to well up in Brandon and so he takes the baseball, throws it at Todd, and it results in a black eye for Todd.  I’m sure we can all agree that this would not be a good way to deal with the emotions of hurt, pain, and anger that Brandon felt!

What if it happened this way…Todd and Brandon are playing catch.  Todd makes a comment that hurts Brandon’s feelings.  Hurt, anger, and pain begin to well up in Brandon, but he takes a moment to breathe.  He lifts his head and says, “Hey, Todd, that comment that you made really hurt my feelings.  Part of me wants to throw this baseball at your head instead of at your glove, but I’m choosing not to hurt you because of what you said to me.”  With that, Brandon thrown the baseball to Todd who catches it in his mitt.  This seems a much better way to deal with the emotions, doesn’t it?

Please don’t misunderstand me here, I’m not trying to downplay the emotion that you’re feeling.  The emotions are real and they must be honestly acknowledged.  It’s not the emotions that are bad.  It’s what you choose to do with the emotions.  Don’t let your emotions dictate your actions.

So, keep going towards that goal!  If you never take a step forward and try, you’ll never know if you make it to your goal!  Make the choice to take a deep breath, get some perspective, and keep moving forward.

You know what?  You’ve got this!

And you know what else?  There’s still time to accomplish your goal!  I believe you can do it!