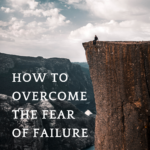 Maybe it’s something you’ve been wanting to do for a long time, but when it comes time to actually do it, you suddenly feel paralyzed…

Maybe it’s going all in and working towards that big, audacious dream you’ve had for a long time…

But that still leaves the question: What do you do with the fear?

Have you ever watched anyone go mountain climbing?  I’m not a mountain climber myself, but the process is absolutely fascinating.  Particularly when a climber starts repelling down the mountain.  Can you see it?  All the anchors firmly secured into the face of the rock itself.  The ropes looped carefully through each anchor, running along the smooth, flat part of the mountain top, then dropping out of sight over the side.  The climber outfitted in her harness.  Gloves on in readiness.  Ropes going around her body to secure her to the mountain.  The ropes are her lifeline.

The climber knows she’s ready.  She’s triple checked her gear.  She’s confident in her equipment.  She’s secured in and ready to go.  She knows the ropes and anchors and gear have all been tested and will hold her.

And yet, before she can start her descent down the mountain, she has to stand right at the edge with her back to the drop off.  She has to lean back, putting all her faith into those ropes.  She has to lean back out over sheer nothing-ness and hang there, suspended in mid-air.  Secured by her ropes and her gear, but knowing there is nothing, absolutely nothing underneath her as she tilts her body over the cliff.

Leaning back, letting the ropes hold you, but terrified to begin moving.  But here’s the thing: If you want to make it back down the mountain, you have to start moving!  If you don’t step out over the edge, you’ll never make it down the cliff.  If you don’t move forward, you’ll never go anywhere.  And if you wait until all the fear is gone, you’ll never begin.

The Fear is Real

What I am saying is that you turn and look that fear square in the face.  You see, fear loves to hide in the shadows.  It gets its power from ambiguity.  From staying hidden.  From not being seen for what it really is.  When you turn and look at your fear head on, you start to take away some of its power.  You start to pull it out of the shadows and bring it into the light.

It’s just like when you shine a light on an object in dark room.  Before you turned that light on, the object was hidden in the shadows.  Maybe it looked a little scary.  Maybe you felt a little fear over what it might be.  But the second the light hits it, it takes on a whole new meaning.  It’s true shape is revealed and you can know what you’re looking at.

Now, I’m not saying all fear will disappear as quickly as figuring out what an object in the dark is.  I’m not saying when you shine a light on your fear all of a sudden you realize the glowing eyes you were seeing through the darkness turns out to be a teddy bear with light glinting off of its marble eyes!

What I am saying is when you refuse to acknowledge the fear, when you ignore its very existence, you give it power.  More power than it should have.

I love to listen to piano music.  I love listening to talented musicians make those 88 keys sing.  As a kid I always wanted to take piano lessons, but we didn’t have a piano.  So I ended up learning how to play the flute.  (Not that I’ve picked up a flute in years, but…)

Fast forward about 20 years and my husband found a keyboard for us along with a program that will teach you how to play piano.  He got it home, set it up, sat down, and started learning how to play piano with the app.  And he was pretty good!  Now, learning to play piano is something I’ve always wanted to do.  And yet, I found myself making excuses for not sitting down on the piano bench and starting to learn.

My kids started learning how to play piano, which told me that if my 4 year old can use this app to start learning, I can certainly do it!  And yet, I still found every excuse in the book to prevent me from sitting down and starting.

Then one day it dawned on me: I’m afraid.  There was a fear there.  Some feeling lurking in the shadows, hiding itself and the real reason it was there.  Keeping me from taking that step.  From sitting down on that piano bench and starting at the beginning, learning how to play the piano.

And I started asking myself this question: Why am I afraid?  What am I so afraid of?

What are You Afraid of?

And yet the question remains, what are you afraid of?

Let’s fact it: As mommas, particularly homeschooling mommas, there are a lot of fears that can rise up and take over!

Am I doing enough?

Am I spending enough time with my kids?  Or am I wasting the time I have with my children on things that won’t matter?

Am I teaching them all they need to learn?

Am I failing my children?

Am I afraid to succeed?

Am I afraid to fail?

Am I afraid that I’m not enough?

Before you can find the courage to take that next step.  Before you can start to move forward without feeling petrified, you need to ask this powerful question:

Why am I afraid?

And don’t just ask it once!  Keep asking it until you feel like you can’t anymore, then ask it one more time just to be sure: Why am I afraid?

Now, I’m not saying that in doing this all your fear will magically go away before you take that first step.  Sometimes the fear will go away, but many times tit won’t.  Oh, you’ll be able to understand why you’re feeling fear a bit better.  But the feeling of fear itself will still be there.

One of the most common and yet least talked about fears is the fear of failure.  It’s so interesting how you can want to do something so badly.  How the desire to step outside of your comfort zone, to try something new, to reach for that big goal is so deeply rooted in you.  And yet, there’s this very real fear of failing that stops you from even taking the first step in the direction you want to go.

More importantly, did they come from the times when you failed and then got back up and tried again?

Courage is not the absence of fear but rather the judgement that something is more important than fear; The brave may not live forever but the cautious do not live at all.

I wish I could tell you there was some miracle pill coated in chocolate that I could give you to instantly take away your fear.  The reality is, those kinds of pills only exist in the movies.

It’s not easy, but the secret to overcoming your fear of failure is to be okay with failing.  Oh, I know it sounds very simple and counterintuitive.  But when you start to be okay with failing.  When you stop seeing failure as a bad thing.  When you stop seeing failing as the end result, the fear of failure starts to get smaller.  When you shift your focus away from the failure itself and start asking the question, ‘What can I learn from this failure?’ you begin to take away the power of failure.

You need to understand something very important: The feeling of fear is not wrong!  Just because you feel afraid doesn’t mean you’re broken or less than or even in the minority!  Everyone feels fear in some way.  Oh, the particular area where you feel fear, how it shows up in your life, might be different than someone else.  But the fact remains that fear is a natural human emotion.

Think about it like this: If you were hiking in the woods of Alaska and you saw a grizzly bear, would you feel fear?  Yes!  Maybe a bit of awe, too, at seeing one of these magnificent creatures in the wild.  But you would still feel fear.  Now, in this case, the fear is a very good thing because the fear will make you cautious.  The fear will prompt you to not walk up to the grizzly and try to pet it.  It will caution you to not get in the grizzly’s way so you don’t become his next meal.  Instead, he’ll continue to enjoy his salmon dinner that he’s fishing for.

But, on the other hand, if you have a dream of learning to play the piano, but you’re scared to begin because you might play the wrong notes, that fear seems silly, doesn’t it?  The instrument itself doesn’t scare you.  Learning something new might feel scary and intimidating.  And I can tell you this one from personal experience: Learning to play the piano does feel scary and intimidating!  But there are no reported cases of piano keys leaping off the keyboard and biting the fingers of the person playing the instrument.  And yet the fear still remains.

In this case, you have a decision to make.  Oh, it’s not a life-or-death decision like in the case with the grizzly bear, but it’s still a big decision.  You need to decide whether you’re going to let your fear of playing the wrong notes keep you from fulfilling your dream of learning to play the piano.  Or if you’re going to acknowledge the fear and make the decision to try, knowing you might fail.  But knowing if you don’t try, you might miss out on something wonderful.

You gain strength, courage, and confidence by every experience in which you really stop to look fear in the face.  You must do the thing which you think you cannot do.

You see, you can’t stop the feeling of fear from arising over different things, but you can decide what to do with that fear.  You can choose to let it stop you.  Or you can choose to do what scares you anyways.

As the calendar changes from December to January and we all celebrate the opportunity for a new beginning, what will you choose?  Will you choose to stay stuck and fearful?  Wanting to do something, but not doing anything because your fear keeps you paralyzed?  Or will you choose to face your fears, to step out on that ledge, to take the giant leap and do the thing that scares you?

Will you choose to have courage and overcome your fear of failure?

Remember, many times the fear won’t go away.  You have to make the decision to keep moving, even through your fear.

I have not ceased being fearful, but I have ceased to let fear control me.

Previous Post: « What is Being Organized and Why is it Important?
Next Post: The Best of the Best: My Top 20 Posts from 2020 »