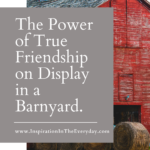 When most people think of Charlotte’s Web, they think of a cute story about some barnyard animals and a clever spider that befriends a pig.  But what if there was more under the surface?  What if you looked at Charlotte’s Web as a tale that puts the power of friendship on full display?

Oh, don’t get me wrong, I’m not denying that Charlotte’ Web is a wonderful barnyard tale!  EB White does an incredible job in his storytelling.  From an enjoyment factor alone there’s so much to admire, appreciate, and love about this children’s book.

And yet, there’s more to be found under the surface.

Charlotte’s Web teems with the life and friendships of the animals that call Homer Zukerman’s barn home.  But not just any friendships: Unlikely friendships.  True friendships.  Friendship that don’t seem to make sense on the surface.  Friendships that make this story worthy of being cherished.  Characters that demonstrate the power of friendship.

What is a friend?  A single soul dwelling in two bodies.

There are many definitions of friendship.  Many great people have tried to bring the essence of friendship into a short sentence or two.  But it’s very hard to do, isn’t it?  Think about it, when your child asks you, “Mommy, what’s a friend?”  Do you have a ready answer or do you stumble around a little for what to say?

Friendship is an essential part of life.  It’s something to be treasured and cherished.  But when it comes to defining it, friendship is downright hard to put into words!

EB White does a masterful job of putting the different aspects of friendship on display in Charlotte’s Web.  He doesn’t bother explaining it.  He simply demonstrates it through his unforgettable characters.  Through these barnyard animals we learn:

A true friend is loyal.  Someone who sees the good, the bad, and the ugly things about you and chooses to stick by you no matter what.

A true friend is someone you can depend on no matter what.

A true friend is someone who sees you not only as you are, but can see greatness in you.  They want to help draw out that greatness, to encourage you to be the best possible you.

Friendship is sometimes hard to understand.  It’s hard to explain.  But through watching the unlikely friendships of these barnyard animals, you can begin to see the power and the beauty of friendships – even amid the dirt and hay!

Whoever thought a young girl and a pig could be friends?

Or a pig and a spider?

Or a gosling and a pig?

And yet, the exact opposite is on display in Charlotte’s Web.  Instead of creating best friends among animals of their own kind, EB White challenges your imagination by creating what might be considered unlikely friendships.  Friendships that don’t make sense outside the book, but that are crucial to the book.

Through this seemingly insignificant story, Charlotte’s Web explores the ideas that friendships – good friendships – can happen with the people you least expect.  People who are very different from you.

The Pig and The Spider

Wilbur and Charlotte make an unlikely pair, don’t they?  Wilbur comes to Homer Zukerman’s farm so concerned about himself and the fact that he has been torn away from his one true friend, Fern.  He needs someone to open his eyes to the world around him.  To help him look beyond himself and see other people – or animals.  Charlotte, in her very direct, no-nonsense and yet loving way, does just that.

Charlotte is a loyal friend.  Her loyalty is on full display in how she takes care of Wilbur.  When she decides to befriend Wilbur, she does it with her whole heart.  She holds none of herself back from this friendship.  She encourages him.  She cheers him up.  She helps him.  She sees Wilbur at his best and at his worst and loves him just the same.

But before you think this friendship is all about how Charlotte can help Wilbur, don’t forget that Wilbur helps Charlotte a great deal, too.  Oh, it’s easy to see how great a friend Charlotte is to Wilbur.  But it’s easy to forget that Wilbur cheers Charlotte when she is feeling down.  He accepts Charlotte for who she is and how she is created.  He doesn’t try to change her, but instead tries to understand thing from a different point of view by talking with her.

Charlotte and Wilbur show the incredible things that can be accomplished when friends work together and use their strengths to help each other.  They show the incredible power of friendship when each person begins to look for how they can give more instead of focusing on what they can get from the relationship.

Fern Arable is one of the unsung heroes of Charlotte’s Web.  You first meet Fern when she “stands up to injustice” and saves Wilbur from an untimely death.  She chooses this tiny pig, the runt of the litter, and takes care of him.  She lavishes attention on him.  As she dotes on him, something magical happens.  A strong friendship, a bond forms between Fern and Wilbur.  But the amazing part is that Fern doesn’t just take care of Wilbur.  She earns his trust simply by being there.

Even when Wilbur moves away from Fern to the Zukerman’s farm, Fern still comes by.  She is there.  Patiently waiting.  Allowing the other animals time to get used to her.  Not pushing them.  Not forcing their trust.  Allowing them to come to trust her on their own terms.  In time, Fern becomes part of the barnyard group.  She is quietly perched on a stool in the sheep pen watching as so much of the story of Wilbur and Charlotte unfolds.

You see, even though Fern cannot understand what the animals are saying, she understands the animals.  She gets them.  She is content to be near them.  And the animals feel her understanding.  They enjoy her presence.  They come to trust her because of her care and gentleness.

Fern becomes their friend by earning their trust over time.  She never forces their trust, but earns it by showing up and simply being there.  Patiently allowing the animals the time they need to learn to trust her.

Even though Wilbur and Charlotte’s friendship takes center stage in the book, there are many other friendships on display.  Take the friendship between the gosling and Wilbur, for example.  Wilbur shows such understanding and care as he takes the gosling under his proverbial wing.  Wilbur shows this young animal through his example and his acceptance that even though they are made differently, they can still be friends.

One of the oddest friendships in Charlotte’s Web is the friendship between Wilbur and Templeton.  EB White does a masterful job of portraying Templeton as a very self-centered rat!  But even in his selfishness, Templeton is able to look beyond his stomach and his own survival to help Wilbur.  Granted, food is a large motivating factor for Templeton.  But towards the end of the story you begin to see Templeton softening a bit.  You begin to see a relationship that started out as a tit-for-tat negotiation turn into a genuine regard for each other.  A realization that survival is possible without friendship.  But to thrive, friendship, depending on others is absolutely necessary.

Different is Not Wrong

Take Wilber and Charlotte for example.  Charlotte is a spider and was born with great talent for creating thread and spinning a web.  When Wilbur sees that Charlotte is skilled at spinning a web, he decides he wants to do the same.  He even gets Templeton to tie some string to his tail so he can try his hooves at spinning a web.  As you can imagine, things do not go as Wilbur planned!  A pig was not created to spin a web!  He simply was not designed to do it.

And while some of the barnyard animals want to laugh at Wilbur for his crazy notions of wanting to spin a web, Charlotte waits patiently.  She doesn’t tell Wilbur he is crazy.  She simply waits, ready with a word of encouragement when he realizes his talent is not the same as Charlotte’s.  When he realizes he should leave the web spinning to her.

This acceptance of differences is on full display in the barnyard.  Each animal is created with different talents.  With different abilities.  And yet the animals embrace each other’s uniqueness.  They accept that all the other animals are not just like them.  And they work together, forming friendships even through their differences.

Drawing Out the Best

Charlotte has a unique talent for drawing out the best in those around her.  She sees qualities in Wilbur that most others did not take the time to notice.  She brings these qualities and this specialness in Wilbur to light through the words in her web.

Yet Charlotte does not just notice Wilbur.  She is very observant of all that is happening in the barnyard.  It’s through this observation that Charlotte is able to connect with, motivate, and draw out the best in others.

She notices the care and persistence of the goose as she sits on her nest of eggs.  And when the goslings hatch, Charlotte takes the time to acknowledge the effort of the goose and congratulate her before the entire barnyard.

Charlotte sees and honors the wisdom of the older sheep.  She draws out the best in him as she leans on his advice when she is unsure what to do.

Charlotte even has a unique talent for motivating Templeton to put aside his selfishness and help others around him.  At first, she does play to his selfishness, but as the story goes on, Templeton begins to respect Charlotte for her wisdom and her planning.

The barnyard at the Zukerman’s farm is a beautiful place that shows what can happen when people – or animals – celebrate their differences and work together.  As the animals work together, they accomplish more.  They are able to rise up and be more than they would be each on their own.

Previous Post: « How to Create A Yearly Homeschooling Calendar
Next Post: Unravelling the Truth from the Lies »