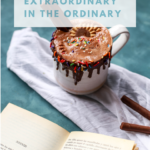 Books.  Chocolate.  Fruit.  Bubbles.  On the surface, all of these things seem incredibly ordinary.  Mundane, if you will.  But what if the extraordinary could be found in the ordinary?

What if, by using a little imagination, you could raise these seemingly mundane, insignificant things to a level that no one could ignore?

What if you could raise them to a place where everyone would recognize them for years to come?

What if all it took was a little imagination?

I wonder if Roald Dahl ever asked these questions to himself as he sat writing, allowing his imagination to spill out through his pen onto paper and bringing his readers along on adventures that most would never dare to dream possible…

Think about it: Who else would have imagined that giants blowing bubbles would create pleasant dreams for children?

Who else would have dreamed up a tasty, inventive chocolate factory run by tiny men from deep in the jungle?

Who else could have thought that a 5 year olds would be able to understand Charles Dickens?

Who else could have imagined that insects could grow to sizes bigger than humans and befriend humans?

Roald Dahl combines humor, real life, fantasy, and a great dose of imagination to create this beautiful blend of wonder, silliness, and incredulousness.  Yet he makes it so relatable to each and every person.

He writes for children about children who have to overcome unbeatable odds.  On the surface it seems that the odds are stacked so high against his characters that there is no way that the circumstances can be overcome.  Yet, there is a hopefulness that threads its way through his writing – an optimism that cannot be denied.  Yes, there is undeniably a great deal of imagination that comes through his writings.  Yet at the same time, as you read his works, it seems possible that the impossible could happen!  This isn’t a glossed-over version of reality that everything just works out okay, but his characters work through trials and learn and grow even as they walk through incredible, seemingly impossible situations.

While the title might seem odd, ‘The BFG’ tells the story of a young girl’s encounter with the Big, Friendly Giant.  Sophie is what you might deem your average child that sees something extraordinary – giants coming and blowing bubbles of pleasant dreams into the windows of children.

A grand adventure follows where Sophie is included into the world of the Big, Friendly Giant, learning a great many things along the way.  My daughter just recently read this book and, while it took her a chapter or two to really get into the story, she fell in love with the book!  The writing, the story, the silliness drew her in to the point where every time I saw her for the next two days, she was reading ‘The BFG.’  In her own words, “I love it!  I really like where the BFG goes with Sophie to capture dreams.  It inspires me to use my imagination more than I already do!”

James and the Giant Peach

Upon reading the first few pages of ‘James and the Giant Peach,’ you might think that the story will be a downer.  A small boy, living with his two aunts that really don’t want him to be around, with no one to play with and no one to talk to…it has all the elements of a heart-wrenching story.  Until you are introduced to the magic of the small, moving, green stone-like crystals.

These magic crystals changed James’ life forever, taking him on adventures that no one would have dreamed – not in a carriage or a boat or on horseback, but in the most inconceivable way possible: in a Giant Peach.

But what makes an adventure better?  An adventure with friends!  James meets the loveliest, most incredible, unforgettable characters that become his unplanned companions on his adventure.  These wonderful characters, each with their own flaws, quirks, and endearing natures become true friends for James, the boy who had no friends.

This is the story of a boy who is smart, funny, and open-hearted; a boy who is willing to make new friends – unconventional though they may be – and learn from them just as they learn from him.  It is a story of adventure and thrills, a story told in words and in rhyme, an unforgettable, unplanned trek rolling across land and floating across oceans, flying across cities and countries.  A story that opens the heart and imagination of all who read it no matter your age.

What’s not to love about a spunky little girl who overcomes unbeatable odds and excels at what she does?  Especially as she reads the whole time that she does it!

When you see a book, you don’t automatically think that it is a vehicle that can propel you to a place outside of your current situation.  Yet, for one girl named Matilda, books were the key, the catalyst, the motivation, and the love that propelled her beyond the circumstances that she was experiencing and into a world that could only be believed in the realm of books.

Matilda is a paradox.  She was practically forgotten by her family, but found her family in the world of books.  She leaned to read at an extremely young age and began to immerse herself into a world beyond her own.  She had a huge capacity to learn and understand things and used that to achieve heights of knowledge that no one could ever have dreamed.

One of the things that I like best about Matilda is that she always stays positive.  She never allows the circumstances surrounding her to drag her down or to determine how she acts.  Oh, to be sure she does get hurt by people.  She does feel sadness and frustration, but she does not allow those feeling to dictate her own actions.  She shows remarkable maturity for her age.

Even when the family that she was born into does not understand her, she seeks out people that do understand her: the librarian who takes Matilda under her wing and guides her reading, Miss Honey who challenges, encourages and loves her, her friend Lavender who sticks by her showing her what true friendship looks like.

Matilda mingles a rare combination of brilliance and humility that is hard to find in anyone – let alone a small child!  Yet, it is this brilliance and humility that allows her to rise above her circumstances and change what she can about them.  She refuses to settle.  She refuses to allow others to tell her what she “should” do, but at the same time, she is not an obnoxious, disobedient child.  Matilda is the perfect blend of spunk, wit, intelligence, and humility!

Charlie and the Chocolate Factory

Have you ever had a dream that is so delicious that you can almost taste it?  A dream filled with chocolate, toffee, creams, mints, marshmallows, and caramel?  A dream where you are almost glad that it is dream because if it was reality you would really want to eat it all?

Happily, Roald Dahl imagined such a place: A chocolate factory run by an extraordinary, inventive man names Mr. Willy Wonka.  And he takes his readers around this magnificent factory through the eyes of little Charlie Bucket, a boy who has faced extremely hard circumstances all his life, yet a boy in whom hope shines bright thanks to the love of his family.  Unconventional as his family may be, Charlie has no doubt that he is loved deeply by them and that knowledge brings out his kindness, love, and generosity towards others.

Everyone wants Charlie to win.  You almost can’t help yourself as you read through these chapters.  And when he does win the golden ticket to tour Mr. Wonka’s factory, you can almost hear the cheers from the readers throughout the years as excited for Charlie as he and his family are!

Bring on the imagination, the seemingly impossible, the rivers of chocolate, the flowers of candy as Charlie and Grandpa Joe are guided through the chocolate factory.  The adventures and inventions that they encounter there will stick with you throughout all your life.  The unforgettable people that they tour with and the Oompa Loompas that they meet will remain in your memory and make you smile years after you have set down the book.

But instead of leaving that book on the shelf, those memories will drive you to pick up ‘Charlie and the Chocolate Factory’ once again and read it anew.  To read the plight of Charlie, to read the rhyming songs of the Oompa Loompas, to read the stories of the other children, and to read the genius of Mr. Wonka.

The pure, brilliant genius of Roald Dahl comes through in this: His books are children’s books, yes.  However, they are not only books to be enjoyed by children.  They are books to be enjoyed and gleaned from no matter the age of the reader.  They are books that bring humor to unpleasant situations, imagination to ordinary situations, and rhyming song to enhance the memory of potentially forgettable situations.  In short, Roald Dahl was a genius who gave the world an incredible gift by sharing his imagination through the words of his books and proving to the world that the key to happiness often lies in the small and simple things of life.

Previous Post: « How to Find Clarity and Eliminate Stress Using the Power of the Post-It Note
Next Post: Animal Adventures around the World »